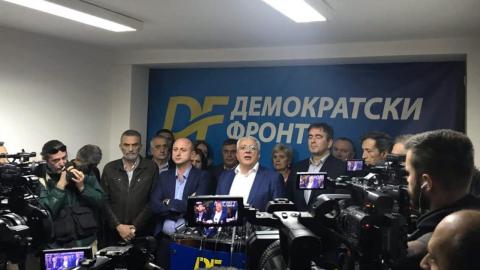 The Higher Court in Montenegro on Thursday sentenced 13 people, including two Russian military intelligence officers and two opposition leaders, to up to 15 years in prison for staging an attempted coup in 2016.

They were found guilty of plotting to commit "terrorist acts" and undermine the constitutional order of Montenegro during the parliamentary elections in October 2016.

Russian military intelligence staffer Eduard Shishmakov and Vladimir Popov were sentenced to 15 and 12 years in prison in absentia.

Two Montenegrin opposition Democratic Front leaders, Andrija Mandic and Milan Knezevic, were given sentences of up to five years.

Serbia's right-wing opposition Dveri movement called the trial verdict "the continuation of repression against the Serbs" in Montenegro. Another right-wing party, the Democratic Party of Serbia, DSS, said that Serbia must not stay silent.

An MP from the ruling Serbian Progressive Party, Vladimir Djukanovic, posted a video in which he called the verdict "anti-Serbian" and said it iwas directed against Serbian leaders and the Serbian state.

Bratislav Dikic, the former commander of an elite Serbian police unit, the Gendarmerie, was sentenced to eight years in prison. He was arrested in Montenegro in October.

Six other defendants received smaller jail term terms. The 14th indictee, Ananije Nikic, will be tried in absentia in a separate case. In 2018, he received asylum in Russia.

Mandic and Knezevic denounced the verdicts, said they would appeal and urged neighbouring Serbia to speak out.

"This is a breaking point for Montenegro," Mandic told a press conference...