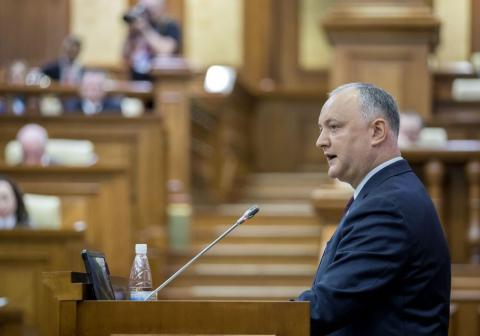 President Igor Dodon said on Wednesday that MPs have two weeks to establish a governing majority and get parliament functioning again or he will call for early elections.

"If during this period [of two weeks], deputies do not find a consensus and create a parliamentary majority, then the president of Moldova will have to dissolve parliament," Dodon said.

According to the Moldovan constitution, the president has the right to dissolve parliament in two circumstances - if it does not adopt any legislative act for 90 days, or after two attempts to confirm a prime minister have failed.

"It is a first in the modern history of Moldova when, almost three months after the parliamentary elections, we have no speaker, no majority and no functional government," said Dodon.

The parliamentary elections were held in Moldova on February 24 and MP's mandates were validated on March 9. A constitutive session of the new parliament took place in Chisinau on March 21.

But the main three parties in Moldova - the Democrat Party, which led the outgoing government, Dodon's Socialist Party, and the pro-European bloc ACUM - have not been able to find consensus on forming a governing majority, mainly due to differences about tackling corruption.

Dodon urged MPs to sort the situation out and get on with parliamentary business.

"I condemn the political egotism and the exaggerated ambitions of some MPs and parliamentary groups. People are expecting results, waiting for the creation of a parliamentary majority to get deputies to work," he said.

However, Dodon and officials from his pro-Russian Socialist Party have triggered mistrust by visiting Moscow several times in recent months for consultations at the Kremlin.

Dodon has already filed a...

Hungary’s Orban in Unlikely Play for Influence in Moldova

Moldova Seeks Plahotniuc’s Extradition From US Over Theft Charges