Lazar Radkov for the “Caps for the future” Initiative, Greta Thunberg and how to Live Peaceful and Happy Life 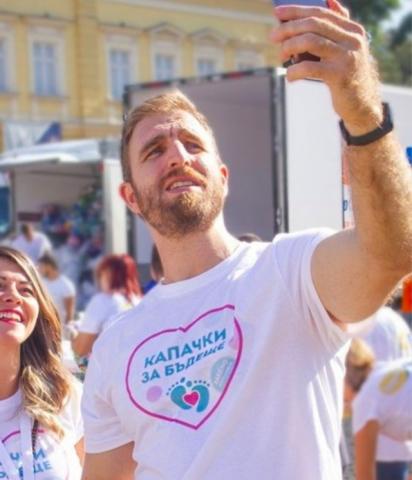 "Caps for the future" is a campaign set up by Lazar Radkov and Martina Iordanova in 2017. Their goal is to collect and recycle as much bottle caps as possible in order to buy new baby incubators and donate them in hospitals throughout Bulgaria.

See the interview with Lazar Radkov below:

How did the idea of ​​"Caps for the future" come up?

In the summer of 2017, together with our colleagues from Live To Lift, we did outdoor training in the park as part of our contribution to the community. At one of these trainings, I suggested that the trainers start collecting bottle caps and decide for what kind of cause to use the money. Martina was also at this training, who later wrote to me that she had a trunk full of caps from her friends. She brought them to me, we took a picture, posted it on the social networks and asked people what is the cause we should collect caps for.

In which city people collect the most caps? Where are the most active people?

Expected - in Sofia. Recent campaigns, however, have a strong response in other cities, and let's not forget that people from all over Bulgaria live in Sofia.

The ​​"Caps for the future" initiative is well-known all over Bulgaria and even abroad. We understand that you already have stations in England, Switzerland and the Netherlands. Do you intend to expand your business beyond Bulgaria?

Outside Bulgaria it is more complicated because you...

Minister expects regional players to be involved in Koper-Divača track

Germany takes in another 249 minors from Greece
EUROPAfest coming to Bucharest, Sibiu and Sinaia this July

Extraordinary Sitting of the Bulgarian Parliament Will be Held on Tuesday

Bulgaria: Free PCR Tests for Parents and Students in Case of an Infected Child in Class