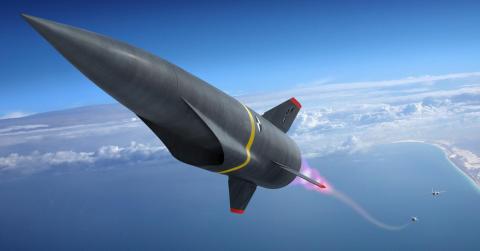 President Vladimir Putin said on Dec. 24 that Russia has got a strong edge in designing new weapons and that it has become the only country in the world to deploy hypersonic weapons.
Speaking at a meeting with top military brass, Putin said that for the first time in history Russia is now leading the world in developing an entire new class of weapons unlike in the past when it was catching up with the United States.
The Russian leader noted that during Cold War times, the Soviet Union was behind the United States in designing the atomic bomb and building strategic bombers and intercontinental ballistic missiles.
"Now we have a situation that is unique in modern history when they are trying to catch up to us, not a single country has hypersonic weapons, let alone hypersonic weapons of intercontinental range.'' he said.
The Pentagon and the U.S. military services have been working on the development of hypersonic weapons in recent years, and Defense Secretary Mark Esper said in August that he believes "it's probably a matter of a couple of years'' before the U.S. has one.
He has called it a priority as the military works to develop new long-range fire capabilities.
The U.S. also has repeatedly warned Congress about hypersonic missiles being developed by Russia and China that will be harder to track and defeat. U.S. officials have talked about putting a layer of sensors in space to more quickly detect enemy missiles, particularly the more advanced hypersonic threats.
The administration also plans to study the idea of basing interceptors in space, so the U.S. can strike incoming enemy missiles during the first minutes of flight when the booster engines are still burning.
Asked to comment on Putin's remarks, a spokesman for the U.S....