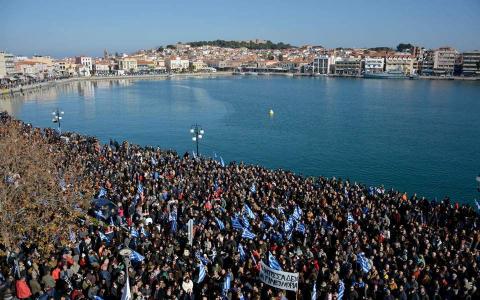 Mayors of three Greek islands bearing the brunt of intensely overcrowded refugee and migrant camps demanded the transfer of thousands to the country's mainland during a meeting with the new migration minister in Athens on Thursday.

During a second day of protests over the plight of the camps and the conservative government's plans to replace them with holding centers, the mayors of Lesbos, Samos and Chios pressed for a swift resolution to the problem.

Migration Minister Notis Mitarakis said after the meeting that the concerns were justified as the migrant crisis has placed a heavy burden on island communities.

"Our priorities include the decongestion of islands, the reduction of migrant inflows, their (migrants') return to Turkey and trust-building measures between the central government and the islands," Mitarachi told reporters.