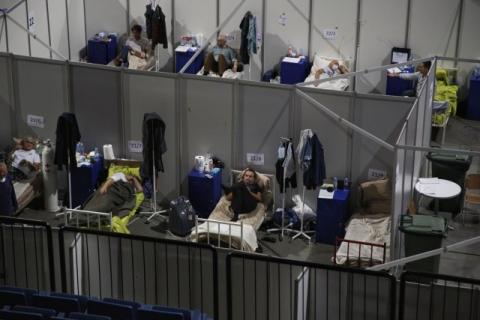 In Serbia, 6.179 new cases of coronavirus out of 15.508 tested were confirmed in the last 24 hours.
In the same period, 65 people died, and currently 7.256 patients are hospitalized, while 252 of them are on respirators.
Prime Minister Ana Brnabic said on Saturday that a session of the Crisis Staff would be held at the beginning of the week, and when asked if additional measures against the spread of coronavirus would be introduced before the New Year holidays, she said that it was considered every day and that data was monitored every two hours.
"Our people will return from abroad for the holidays, we will monitor the epidemiological situation in all countries and introduce measures if necessary. We monitor every day and think about additional new measures," Brnabic pointed out.
The introduction of tougher measures was also mentioned by President Aleksandar Vui, who, when it comes to epidemiological measures, aimed at preserving the health system, said that the state would do what it had to do.
"If we have to introduce tougher measures, we will introduce them," the president pointed out. But what new measures could be taken? Epidemiologists gave a hint in the previous days about everything that could be discussed today.
This primarily refers to the citizens of Serbia who come to our country for the upcoming holidays. Therefore, the possibility of closing everything at 5 pm, for which the medical part of the Crisis Staff had advocated before.
Judging by the recent statement of the Minister of Health, we are not far from being faced with a curfew and a complete lockdown.