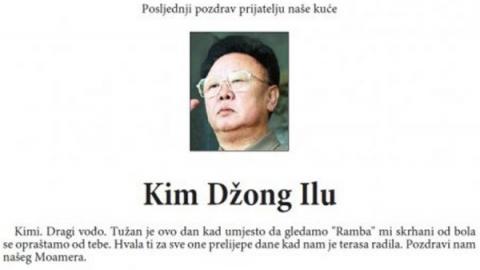 The gesture makes Maradona the latest in a long list of global celebrities and political figures to be honored with an obituary in the Balkans, following the likes of Libyan leader Muammar Gaddafi, Cuban revolutionary Fidel Castro, pop star Michael Jackson and actor James Gandolfini, late star of the popular US crime drama Sopranos.

In Montenegro, the tradition of announcing a death via the local newspaper remains strong despite the communications revolution of the past few decades and the decline of print media.

To this day, many Montenegrins still begin their day by browsing the obituaries section of their local newspaper to learn of any recent deaths.

Celebrity obituaries, while perhaps heartfelt, have also become a source of entertainment on social media.

Media reports say the trend began in 1993 in Serbia, when two young men from the capital, Belgrade, placed an obituary to Columbian drug kingpin Pablo Escobar - killed in a shootout in December that year - in the establishment daily Politika.

"The police detained us five days after the obituary was published," said one of the men, Dejan Jelovac. The investigators soon realized it was a joke, he told the news portal Press online in 2008.

"They knew I had nothing to do with Escobar. If I did, I'd have a lot more to my name than the 40 square feet in a backyard house where my family and I spent our whole life."

Since then, obituaries in the former Yugoslavia have honoured the likes of Venezuelan President Hugo Chavez, North Korea's Kim Jong-il and South African anti-apartheid icon Nelson Mandela. Obituaries to Maradona appeared in a number of local newspapers across the region.

'Send our regards to Gaddafi'