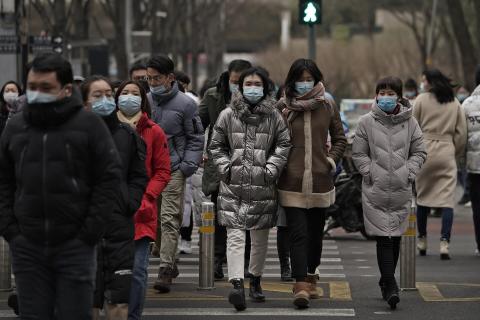 China recorded its first COVID-19 death in eight months on Jan. 14, as experts huddled to discuss worrying new strains of the coronavirus that are spreading rapidly around the globe.

The gathering in Geneva of the World Health Organization's emergency committee comes as their colleagues landed in Wuhan for a long-delayed mission to find the origins of the virus.

More than 91 million people have been infected, with almost two million of them dying, according to figures widely thought to be an underestimate.

Much of the planet is enveloped in a second or third wave of the disease, with populations chafing under painful and economically damaging restrictions.

China - where the virus first emerged - has again locked down millions of people as it fights to control a fresh outbreak that has now claimed its first victim, sparking anguish on social media.

"I haven't seen the words 'virusdeath' in so long, it's a bit shocking! I hope the epidemic can pass soon," one user wrote.

The death comes as a politically sensitive investigation into the origins of the COVID-19 pandemic finally got under way with the arrival of a 10-strong team in Wuhan, where the virus emerged in late 2019.

Mission leader Peter Ben Embarek said the group would start with a two-week quarantine at a hotel before the probe begins in earnest.

But, he warned, it "could be a very long journey before we get a full understanding of what happened".

Beijing has argued Wuhan might not be where the virus originated, only where it was first identified.

"I don't think we will have clear answers after this initial mission, but...