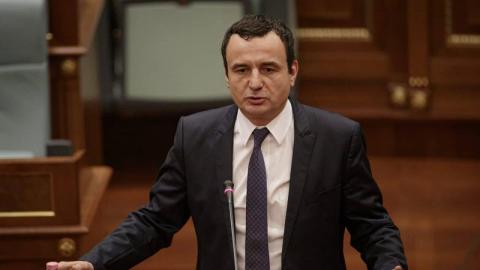 Albin Kurti's hopes of becoming Prime Minister of Kosovo once again have been set back after the Central Election Commission, CEC, on Wednesday said 15 of the 28 political entities that had applied to run in the February 14 snap elections had proposed candidates "not in line with the Law on General Elections, which specifies that a person who has been found guilty of a criminal charge in the last three years cannot run as an MP".

Kurti, head of the main opposition Vetevendosje party, and Albulena Haxhiu, a former Justice Minister, were were handed conditional prison sentences by a Prishtina court in January 2018 for throwing tear gas in parliament.

The Kosovo Judicial Council verified the candidates acting on a CEC request. "Overall, 47 of 1,081 candidates have been found guilty of a crime by a final court verdict," CEC spokesperson Valmir Elezi told the media.

Those affected by the process could submit a challenge to the Election Complaints and Appeals Panel after the CEC completes certification. If the outcome is still negative, the Supreme Court is the final instance to decide the contest.

No names haved yet been provided, but BIRN has learned that the list, among others, contains Kurti and Haxhiu.

At the time of the tear gas incident, Kurti's party bitterly opposed the then government's agreement on border demarcation with Montenegro and another agreement reached with Serbia on establishing a semi-autonomous association of Serb-majority municipalities in Kosovo.

Immediately after the CEC communicated its information, Haxhiu took to Facebook to defend Kurti, the party's candidate for Prime Minister in the election.

"Albin enjoys the support of many citizens and this support is undisputable, therefore citizens are...