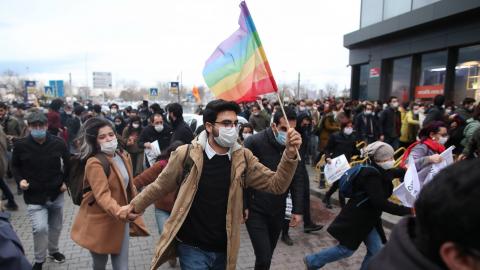 The number of students detained is not yet known but it is estimated to be in the hundreds. Police chased fleeing protesters through the streets of Kadikoy, and journalists and local residents were also injured during the crackdown.

Over the past month students and academics at Bogazici University have been protesting against the appointment of a new rector, Melih Bulu, who was given the post on January 1 by President Recep Tayyip Erdogan.

Bulu is a member of Erdogan's ruling Justice and Development Party, AKP. He was rector of Halic University in Istanbul before assuming the new post.

Tuesday's protest went ahead despite the Kadikoy district governor's ban on any public events and police checks on buses, metro trains and ferries to stop students reaching the site.

Students at the protest chanted slogans like "We do not want appointed rectors", "We will not stop" and "Take your hand off the universities".

Over 150 people were detained at a previous protest on Monday, when thousands of police were deployed at the campus gates and snipers were placed on rooftops.

Tension rose further when the government alleged that the demonstrating students insulted Islam at a protest exhibition at the Bogazici University campus.

Four students were detained for allegedly displaying an LGBT rainbow flag next to a picture of an Islamic holy site at the exhibition. Two of them have been charged.

In a post on Twitter, Interior Minister Suleyman Soylu said that "we will not tolerate the LGBT perverts who insulted Kaaba [an Islamic holy site in Mecca]". Twitter later flagged his post as violating its policies on "hateful conduct".