Turkey will continue its fight against YPG in northern Syria: Akar 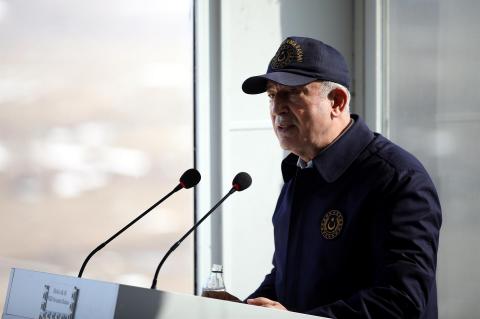 Turkey will not abandon its struggle against the YPG's efforts to create a terror corridor in northern Syria, the Turkish defense minister has said, in a clear message to the United States which declared that its policy to partner with the YPG in the fight against ISIL will not change.

"Our anti-terror struggle will continue until the last terrorist is eliminated. Accordingly, our fight against the YPG, which is nothing different from the PKK, will also continue. It's better our allies and friends know about it," Defense Minister Hulusi Akar told reporters in eastern province of Kars where Turkish and Azerbaijani troops conducted a joint military exercise on Feb. 11.

Akar's statement was regarded as a message to the United States which recently said it won't change its policy of supporting the YPG as its local partner in the fight against ISIL in northeastern Syria. Turkey recognizes the YPG as the PKK's offshoot in Syria and therefore as terrorist. The U.S. says it is siding with the SDF in Syria.

"The terror corridor [in northern Syria] was smashed. Afterwards, everybody should know that a terror corridor cannot be created there," Akar stated, referring to the Turkish army's cross border operations into Syria to defeat the YPG and ISIL.

The minister stressed that a political process accompanied with efforts to write a new constitution for Syria could be possible thanks to the Turkish army's elimination of terrorists in Syria, including ISIL and the YPG.

"More than a million Syrians returned to their homes voluntarily, safely and in dignity. Some 450,000 of them returned to Idlib. Turkey has been undertaking and will undertake all the measures in the fields of education, health and humanitarian assistance for the normalization...