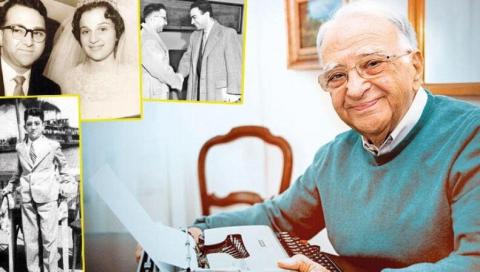 Sami Kohen, a 93-year-old active journalist known as a flagship of international news coverage in Turkey, has told the milestone of his 80-year-long professional life in the latest interview with daily Hürriyet.

Born in 1928 in Istanbul as a son of Albert Kohen, Kohen's first piece was published in a newspaper when he was only 13.

"It was the time of the Second World War. At home, I only heard about the world," Kohen said while explaining how he focused on world news when he decided to become a journalist.

He made a revolutionary touch on world news covering in Turkey when he started translating news he heard from international radios.

"Those days, newspapers were getting international news from Anadolu Agency only. I knew both English and French. I started translating news from world radios," he said.

"I was working as a one-man news agency," he added.

He had to name that "one-man agency." So, he wrote "New Istanbul Radio Service (YİRS)" at the end of his stories.

"The YİRS became a brand in a short time," he said.

Kohen became a known figure worldwide with his journalistic activities as he entered "forbidden countries" of the time.

"Going into some 'closed countries' was my target. I went to Albania in 1963, China in 1971 and North Korea in 1985. My articles about these trips were published in world papers," he said.

Noting that trips were not easy, Kohen said, "To enter Albania, I had to register myself as a masseur of a football team. The truth came to light when I started taking photos in the country."

On being asked about the most important events he witnessed in his nearly centenary life, he quickly made a list and said: "Cold War, the end of the Soviet Union, space journeys, the...