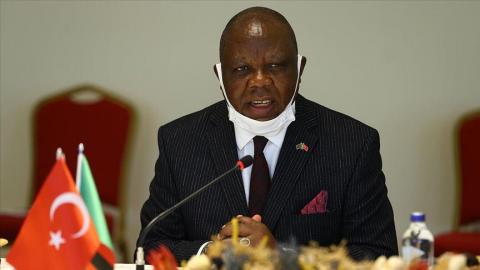 Turkey on May 12 expressed its "heartfelt condolences" to Zambia over the death of Joseph Chilengi, the ambassador of the southern African nation to Ankara.

Turkish President Recep Tayyip Erdoğan also extended his condolences to the widow of the diplomat, who passed away on May 11.

Erdoğan spoke with Ivy Mwansa Chilengi to express his sadness over the passing of her husband Joseph Chilengi, said a Turkish Communications Directorate statement.

Extending condolences to Chilengi's family and the Zambian public, Erdogan said the diplomat's contributions to relations between his country and Turkey will always be remembered.

He added that all procedures for bringing the diplomat's body back to Zambia will be provided by Turkey.

On Twitter, the Turkish Foreign Ministry said, "Deeply saddened that Mr. Joseph Chilengi, Ambassador of Zambia passed away yesterday in Ankara. Heartfelt condolences to his family and the friendly people of Zambia."

Zambia's Foreign Minister Joseph Malanji said in a statement, "It is with a heavy heart that I announce the death of our Ambassador accredited to the Republic of Turkey, His Excellency Dr. Joseph Chilengi after a short illness."

Telling how the late ambassador "worked very hard to promote bilateral and trade relations between the Republic of Zambia and the Republic of Turkey," Malanji also expressed condolences to the Chilengi's family.

Chilengi, 61, passed away late on May 11 at a private hospital where he was getting medical attention, said a Zambian Foreign Ministry statement.