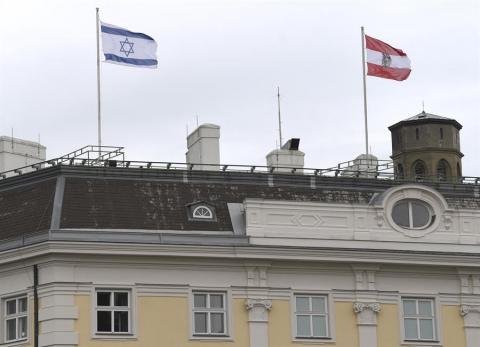 Turkey's presidential spokesman on May 14 criticized Austrian Chancellor Sebastian Kurz for hoisting the Israeli flag on the roof of the chancellery building in Vienna amid attacks on Palestine by the Jewish state.

"This is what encourages Israel to continue its attacks on Palestinian people," İbrahim Kalın said in a tweet. "I hope those Austrians and Europeans with a sense of reason and morality will reject these disgraceful politics."

Kurz had tweeted a photo with a caption that read: "Today the Israeli flag was hoisted on the roof of the Federal Chancellery as a sign of solidarity with #Israel ... Together we stand by Israel's side."

"With this attitude, the Austrian chancellor has put his signature under Israel's massacre in Gaza," he said in a statement on Twitter.

Critical of Kurz's stance about Israel, Oktay added that this attitude, "reinforcing the Islamophobia and fascism that are increasing in Europe, is a black stain recorded in the history of humanity."

Ömer Çelik, spokesman of the ruling AKP, also censured Kurz and said: "This person [Kurz] is the symbol of Islamophobia, hostility towards Turks and [President Recep Tayyip] Erdogan in Europe."

"It is only a dream to expect him to side with those oppressed. His siding with the oppressor is his political compass," he added.

Tensions have been running high since an Israeli court ordered the eviction of Palestinian families from the Sheikh Jarrah neighborhood of East Jerusalem.

Palestinians protesting in solidarity with residents of the neighborhood were then targeted by Israeli forces.