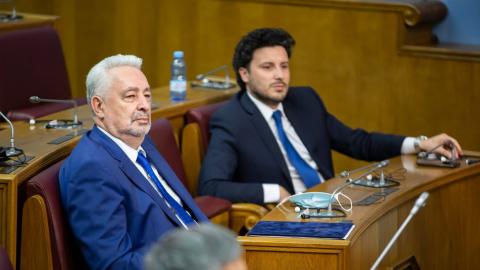 Krivokapic said that economic stability and European Union membership must be the key goals of the new government - which unlike the current non-partisan cabinet, will be made up of political party officials, as the Democratic Front and Democratic Montenegro have demanded.

"The political parties that will constitute the new government have to put a moratorium on all issues that do not have a broad social consensus and that deeply divide Montenegrin society," Krivokapic said in a statement.

He said that the new cabinet will have three deputy prime ministers.

He formed his government after three opposition coalitions, For the Future of Montenegro, Peace is Our Nation and Black on White, won a narrow majority in parliament in a watershed election in August 2020 that ended three decades of rule by the Democratic Party of Socialists, DPS

For months, the pro-Serbian Democratic Front, the largest faction in For the Future of Montenegro, has been demanding a reshuffle to bring in political party figures, accusing Krivokapic of poor coordination with the parties that back him in parliament in the appointment of police officials and the drafting of laws.

Krivokapic has resisted the appointment of political figures in his non-partisan cabinet, but the crisis deepened on September 16, when the Democratic Front and...