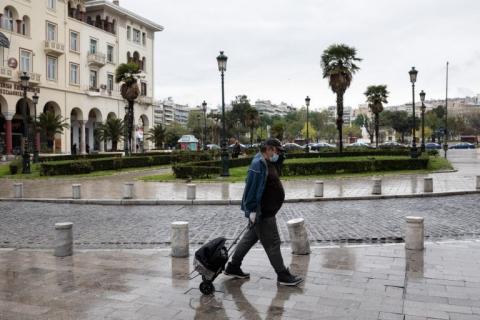 Experts and the government are concerned about the course of the pandemic in Northern Greece. It is characteristic that epidemiologist Gikas Maiorkinis in yesterday's official information about the coronavirus, spoke of a "worrying exception" of the areas in the north of the country.

The Assistant Professor of Epidemiology, on the other hand, said that in the rest of the country we are in a phase of stabilization and perhaps a slight contraction in relation to the pandemic, which is observed for the fourth consecutive week.

The Deputy Minister of Health, Mina Gaga, also spoke about the increasing trend of cases in Thessaloniki and throughout Northern Greece, adding that from prefecture to prefecture it ranges from 11-36%, something that worries experts especially.

"Autumn is coming and winter is ahead," Ms Gaga said. "An alarm bell is ringing, we want everyone to be aware that the cases in Northern Greece are rising," she stressed.

The areas that are in the "red"

As expected, due to the epidemiological data that had become known, three other regions of the country were put under partial lockdown status. As of today, Friday, September 24, the Regional Units of Kastoria, Xanthi and Drama are included in level 4 (red) of the Epidemiological Map of the country.

According to the official announcement from the Civil Protection, the validity of the special, local, measures in the Regional Units of Pieria, Imathia, Pella, Kavala and Argolida is extended, after the re-evaluation of the epidemiological data by the Infectious Diseases Committee and the National Commission. Protection of Public Health against the coronary artery Covid-19 in the context of the epidemiological surveillance of the country by Regional Unit and Municipality on...