Femicide victim burned while she was alive: Report 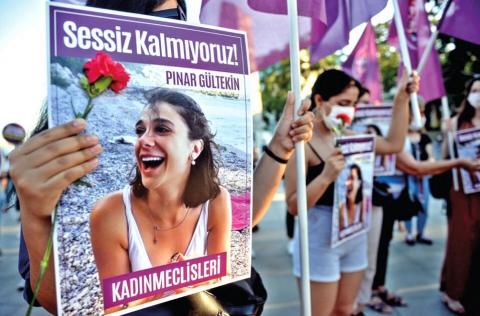 A forensic report submitted to a local court in the high profile femicide case reveals that Pınar Gültekin, a 27-year-old student who was murdered in the Aegean province of Muğla last year, was burned alive.

"A report from the Forensic Medicine Institute showed once again that Pınar Gültekin was killed with a monstrous feeling and burned alive," said Yiğit Gökçehan Koçoğlu, lawyer of the victim's family.

He added that the trial process was getting wider with each passing hearing despite the contradictory statements made by the defendants.

Subjecting to cross-examination in the last hearing held in Muğla's Menteşe district, the defendants other than main suspect Cemal Metin Avcı in the case denied the accusations against them, demanding acquittal from the court.

The court adjourned the hearing to Nov. 1, deciding to continue Avcı's detention, to examine the forensic medical report and the response to the warrant sent to the U.S. regarding Avcı's smartphone password.

The murder suspect already faces aggravated life imprisonment, while prosecutors asked for up to five years in prison for the rest of the family members for helping Avcı cover up his tracks after the crime.

Gültekin had disappeared after leaving her home on July 16, 2020. With mounting evidence against him, Avcı had confessed that he had strangled her to death before burning her body and dumping it in a forest.