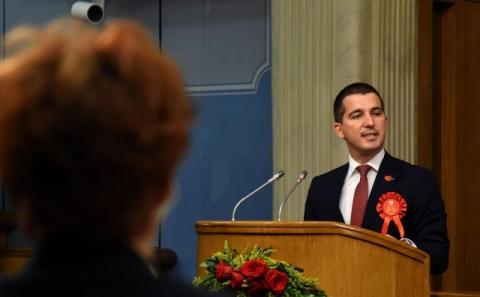 Democratic Montenegro reacted after the Civic Movement United Reform Action (GP URA) handed over this initiative to the Assembly.
"URA deputies together with DPS submitted an initiative to overthrow the government. The betrayal of the people's will of epic proportions is being prepared", the Democrats state on Facebook.
The proposal for a vote of no confidence in the Government of Montenegro was signed by 31 deputies. It was supported by the deputies of the "In Black and White" coalition, but also by the deputies of the minority parties, SDP, SD, LP and DPS.
"When you combine political fraud, political hypocrisy, political immorality, political cowardice and political betrayal, you get a great national betrayal. A betrayal of epic proportions. Betrayal of the century.

Minister of Foreign Affairs, Djordje Radulovi, assessed that the Deputy Prime Minister, Dritan Abazovi, had contributed the most to the work of the Government during the previous year.
"I do not share the view that he should resign because of several things that I know, and which are confirmed by the results," said Radulovi.
He stated that "in a very complicated political moment, as well as in any complex and confusing situation, it is our obligation to take care of everything we say and do on the public stage."
"Simplification and generalization are never a choice, least of all on days like this. Thus, the claim that the ministers in the Government of Montenegro consider it ethical for the Deputy Prime Minister Dritan Abazovi to resign from that position, is one of the sentences that generalize the situation, spoken not only in his own name, but in the name of everyone. Any generalization when we talk about the work of...