Barricades at Dawn: Watching the Siege of Sarajevo Begin 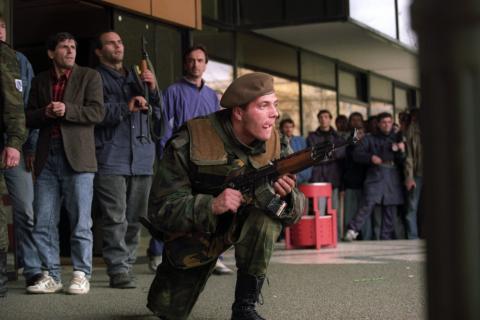 It was the morning after the February 29-March 1 1992 independence referendum in Bosnia and Herzegovina - an event that a well-known BBC journalist had described to me, sipping a beer, as "good news at last from the Balkans".

Like most centre-left British journalists, he seemed to disapprove of the previous year's war of Croatian independence - too nationalistic, too ethnic. And wasn't it all saturated in a now deeply unfashionable Catholicism?

So why was Bosnia's independence so different, such "good news", I asked? He pointed at a referendum poster on a wall. "It's written in Serbian Cyrillic as well," he explained. "It's inclusive".

I wanted to laugh. The politics of London translated to the Balkans via an "inclusive" poster! I'd been in Belgrade since 1988, reporting for the Independent newspaper, and I had watched the continuing rise of Serbian leader Slobodan Milosevic and the expansionist Serbian nationalism he channelled and championed.

I knew enough about Milosevic, and about the mood in Serbia, to know that posters written in "inclusive" Cyrillic letters were not going to persuade the Serbs to just let go of Bosnia - not after what I'd seen in Croatia, a country home to a far smaller Serb community.

There were at least 1.5 million Serbs in Bosnia and I'd met their leaders, from Radovan Karadzic to the faux-scholarly Nikola Koljevic and the schoolteacherish Biljana Plavsic. I'd been struck by their conviction and intransigence.

Karadzic had lectured me standing in front of a huge map of Bosnia with a long pole, pointing to all the bits that belonged to the Serbs, which seemed to be almost everything, except Medjugorje.

Koljevic had lectured me in drawling Oxford-ish English about the historic...