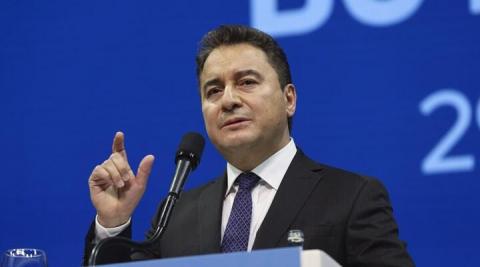 DEVA Party chairman Ali Babacan declared on April 27 that his newly-founded party would run in the next parliamentary elections with its own name and logo, meaning DEVA Party officials will not run for parliament with the ticket of either Republican People's Party (CHP) or the İYİ (Good) Party.

The move was interpreted a challenge against the ruling coalition, which amended the electoral law to make it difficult for smaller parties, such as the DEVA Party, the Future Party, the Felicity and the Democrat Party, all members of the Nation Alliance, to have a seat in parliament by obliging them to garner at least 7 percent of votes.

"We are fully loyal to the spirit of the opposition alliance. We support all the decisions taken by the alliance. And we will fully support the joint presidential candidate of the opposition," DEVA Party deputy leader İdris Şahin was quoted as saying by the Turkish media.

A CHP official also said there was nothing wrong with Babacan's decision. "It won't affect our plans to work jointly for the polls," said Engin Altay, deputy parliamentary group leader of the CHP.

"As stated by Mr. Babacan, there is no problem concerning the six-way alliance. We don't see any problem for the continuation of our cooperation for our alliance and democracy," he said.

Temel Karamollaoğlu, the chairman of the Felicity Party, also said, "It is very normal for any political party to run in the elections with its name and logo. This is not against the alliance."