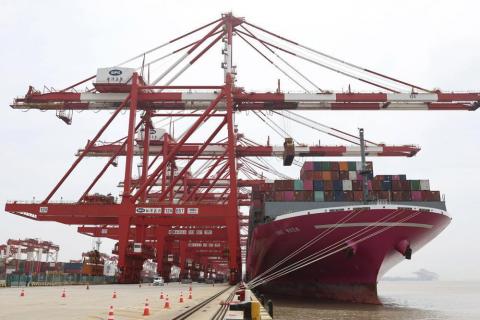 China's export growth tumbled in April as global demand weakened, adding to pressure on the world's second-largest economy after Shanghai and other industrial cities were shut down to fight virus outbreaks.

Exports rose 3.7% over a year earlier to $273.6 billion, down sharply from March's 15.7% growth, customs data showed Monday. Reflecting weak Chinese demand, imports crept up 0.7% to $222.5 billion, in line with the previous month's growth below 1%.

Demand for Chinese exports is under pressure from high inflation and interest rate hikes in the United States and other major markets and consumer uncertainty about the economic outlook and job prospects.

Companies and investors worry the ruling Communist Party's "zero-COVID" strategy that shut most businesses in Shanghai and other industrial centers will disrupt global trade and activity in autos, electronics and other industries.

"Virus disruptions continued to take a toll but the main headwind to exports is weakening foreign demand," said Julian Evans-Pritchard of Capital Economics in a report. "We expect export volumes to fall further over the coming quarters."

Exports to the United States rose 9.5% to $46 billion despite lingering tariff hikes in a fight over Beijing's technology ambitions. Imports of American goods advanced 0.9% to $13.8 billion.

China's global trade surplus widened by 19.4% to $51.1 billion while the politically volatile surplus with the United States contracted by 65% to $9.8 billion.