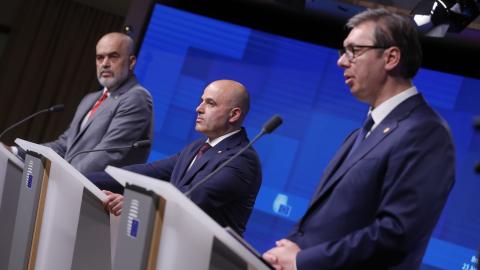 Three Western Balkans leaders expressed displease over the poor outcome of the EU summit in Brussels on Thursday.

The three stressed the lack of a breakthrough in the Bulgarian blockade of North Macedonia's and Albania's accession bids, while EU countries gave purely verbal support to Kosovo on visa liberalisation and show apparent disunity on granting Bosnia and Herzegovina candidate status.

Thanking the French presidency and French President Macron for their efforts, North Macedonia's Kovacevski said the so-called French proposal for a breakthrough in the Bulgarian blockade of his country was unacceptable as it stands.

"All … 27 countries that joined the Union, [did so] proudly, with all the differences they brought, and with full respect for their own and others cultural, ethnic, linguistic and historic differences," he said.

"None of this was problematized on their EU path. That is what we also wish for. Nothing more and nothing less; respect for the linguistic, ethnic, cultural and historic identity of my people."

Kovacevski added that for the French proposal to work, among other things, North Macedonia must get guarantees about the Macedonian identity and language, and that Bulgaria will not set even more conditions during the EU negotiations.

"North Macedonia has been a candidate member for almost 18 years. We signed the Stabilisation and Association Agreement exactly 21 years ago. In March 2020, the European Council made a decision for unconditional start of negotiations. But here we are today and the ...