Dominique Strauss-Kahn, the former managing director of the International Monetary Fund, has called the economic policy implemented in Greece during the crisis unbearable.

People walk in front of European Parliament election posters of the Greek leftist SYRIZA party in Athens on Friday. Up to 350 million Europeans are eligible to vote in elections to the European Parliament taking place on May 22-25 in all 28 EU member states.

PASOK veteran Apostolos Kaklamanis revealed in a statement on Friday that on November 8, 2011, he accepted an offer from then Prime Minister George Papandreou to become interim premier after the latters aborted effort to hold a referendum on Greeces second bailout.

In the statement, Kaklamanis explained that he held brief talks with Papandreou before agreeing to take on the role.

A Canadian police investigation into a racket producing fake Canadian passports for underworld figures has been linked to two brothers believed to be major players in the cocaine trade. 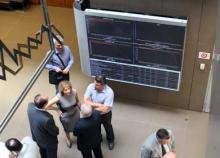 Fears regarding Greeces political stability in this election period saw investors feeling overexposed to the Athens market continue their flight on Friday, forcing major losses on the bourse for the second day in a row.

On Sunday, May 11, Athenian cyclists rode through the capital's center calling for a city that will make space for every bike and pedestrian while reducing the space given over to cars. The campaign was part of an ongoing nationwide effort that this year included at least 40 Greek cities.

The NGO aims to encourage Bulgarian journalists to state their demand for dignified working conditions directly to the European Commission, according to reports of the Bulgarian National Radio (BNR).

Prime Minister Antonis Samaras on Friday visited the construction site where a junction linking the Ionia Odos highway to Mesolongi in western Greece is under way and declared that more than 4,500 people would be employed on the project by the end of the year

Ahead of EU elections on May 25, Greece's embattled government faces a first test in municipal and regional elections on Sunday as the country struggles to return to growth following years of economic crisis.

Jean-Claude Juncker, the center-right candidate for European Commission president and former Eurogroup chairman declared on Friday that SYRIZA leader Alexis Tsipras, his leftist rival for the top EC post, would not make a good Greek Prime Minister as he would not cooperate effectively with the commission.

Lower-rated euro zone bond prices slipped on Friday, deepening sharp falls on Thursday triggered by nervousness about the stability of the Greek government, a tax on foreign holders of Greek bonds, and weak growth.

Coast Guard officers at the port of Patra, western Greece, detained more than 30 would-be migrants late on Thursday following checks on truck that had been due to board cargo vessels bound for Italy.

A total of 22 migrants were found in one vessel and another 10 in the other, according to officers who gave no details about their ethnic origin.

The five EU Commission President candidates clashed Thursday evening in a televised debate in the European Parliament chamber in Brussels.

It was their last meeting ahead of the upcoming European elections next week and also the first in which Greek leftist coalition SYRIZA's leader Alexis Tsipras, the European Left Party nominee, took part.

The head of the Finance Ministry's General Secretariat for State Revenues, Haris Theoharis, warned on Friday that those submitting bogus data in a bid to qualify for a portion of the so-called social dividend, coming from Greece's primary surplus, would face criminal charges.