Removal of tracks marks start of Belgrade on Water project 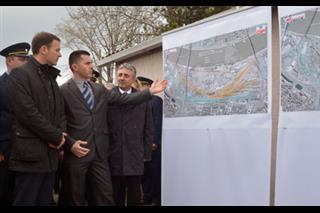 BELGRADE - The Belgrade on Water project kicked off Saturday with a removal of railway tracks on Platform West of the Belgrade railway station, and the first stage of the works should be completed in six to eight months from now.

The commencement of the works was attended by Serbian Railways CEO Dragoljub Simonovic and head of the Belgrade interim authority Sinisa Mali, who said it was a historic day for Belgrade and Serbia.

Mali told a massive number of journalists who were present at the ceremony that the “Belgrade on Water” project is a development chance for the entire country and particularly Serbia’s construction industry, adding that the works to construct the first four facilities at the Sava amphitheater area should begin by the end of the year.

Simonovic said that the costs of the first stage of the works at this location amount to EUR 2.55 million, adding that about one-third of the predicted 50 kilometers of tracks and 200 switches will be moved from the Sava River bank lines much before the deadline, which is between six months and eight months from now.

The “Belgrade on Water” project envisages the construction of a residential, commercial and cultural complex, an investment by the United Arab Emirates worth USD 3 billion.

Tanin: I raised importance of continuity in dialogue