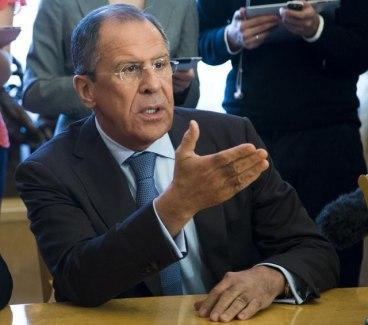 MOSCOW -- Ukrainian authorities' orders to troops to fight their own people are "impossible," Russian Foreign Minister Sergei Lavrov has told Itar-Tass on Monday.

His comments came as 438 Ukrainian military personnel reportedly fled across the border into Russia overnight.

“We have repeatedly helped Ukrainian law enforcers asking for help, asking us to receive their wounded friends. We have helped, offering medical assistance and given the possibility of return to all those who wanted it without impeding them, without keeping anyone forcibly,” Lavrov said, and added:

“To tell the truth, those who had wished to return to Ukraine were then accused of deserting and were court-martialed."

The news agency also quoted Lavrov as saying that he "expected the Ukrainian authorities to show humanity in the long run and will realise the absolute inadmissibility of the situation when Ukrainians are waging war against each other, when they are made to fight against their own people while those who refuse are seen as traitors to their own country."