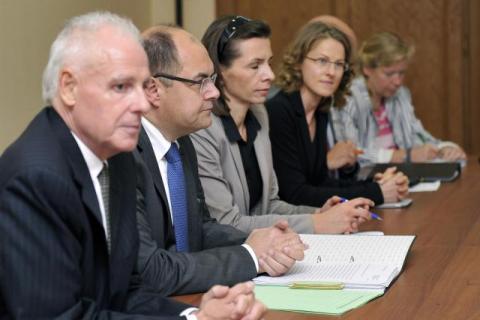 
BELGRADE -- Serbia will become an EU member state "in the foreseeable future," German Minister of Food and Agriculture Christian Schmidt has said.

He also described Serbia as "a major factor of cooperation in the region."

Germany will back Serbia on its European path, Schmidt told reporters in Obrenovac on Monday after touring the works on the embankment on the Sava River, which was damaged by the massive floods in May.

Schmidt, who spoke to Serbian Prime Minister Aleksandar Vučić earlier in the day, said that he is satisfied with the way the Serbian government is resolving regional conflicts.

The German minister said that he sees Serbia as a good partner for regional cooperation and noted that a big task lies ahead for the country on its path to the EU.

Schmidt said that he discussed with Vučić a joint investment in the food industry that would range from production all the way to consumption.

"We also want to continue the cooperation in the general political sphere, in particular with respect to Serbia's European path," Schmidt said, adding that talks with the EU can sometimes be difficult, but that Germany will back Serbia on that path.

Serbia has great agricultural potential and the two countries will work together at European and bilateral level, primarily towards boosting cooperation in crop and livestock farming, the German minister said.

Serbian Minister of Agriculture and Environmental Protection Snežana Bogosavljević-Bošković, who visited Obrenovac with her German counterpart, said that the Serbian government is "aware of the huge work that lies ahead, but that it has enough capabilities to respond to the task,...