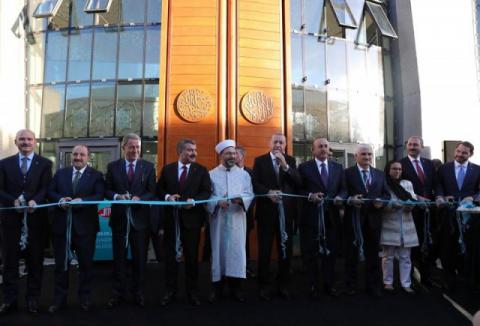 Cologne (Germany) (AFP) - Thousands of demonstrators hit the streets of Cologne Saturday as Turkish President Recep Tayyip Erdogan opened one of Europe's largest mosques at the end of his visit to Germany, with police out in force to manage rival rallies.

The inauguration capped a controversial three-day state visit aimed at repairing frayed ties with Berlin after two years of tensions.

During his stay in Berlin, Erdogan met twice with Angela Merkel for talks, with both leaders signalling their interest in a cautious rapprochement.

But the German chancellor stressed that "deep differences" remained on civil rights and other issues.

Before returning home, Erdogan travelled to the western city of Cologne where several thousand critics turned out to protest everything from Turkey's record on human rights and press freedom to its treatment of minority Kurds.

At one of the rallies on the bank of the Rhine, demonstrators waved banners reading: "Erdogan not welcome".

Cansu, a 30-year-old student of Turkish origin, came from Switzerland to join the protest.

"I want to be the voice of people who can't take to the streets in Turkey. Because they have been arrested, killed or otherwise suppressed," she told AFP.

"Erdogan thinks anything that differs from his opinion is terrorism."

The Rivers are Warming at the Same Rate as the Atmosphere