Bulgaria's Path to the Euro: 13th Annual Meeting of Business with Government 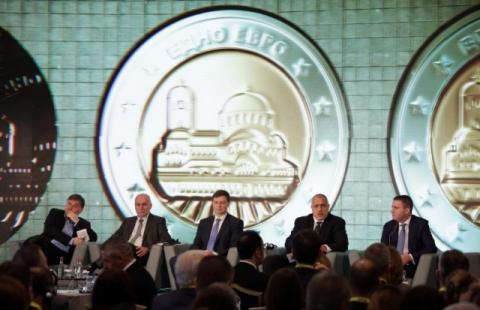 The PM delivered an extensive speech, which touched almost all aspects of the Bulgarian economy. He was firm that Bulgaria has taken the right path, namely the adoption of the Euro. Borissov pointed out that this will ensure discipline, security and transparency and will guarantee people's money. It would not matter who owns the banks in Bulgaria or what he does because the money of the ordinary people as well as the money of the business will be protected, the PM explained.

He also made a brief retrospection of what his government has achieved since 2014. According to him, the average wage has gone up by nearly 50%, GDP - by nearly 40%, and the country's external debt at the end of the year will reach 18.6%, which will place Bulgaria among the countries with the lowest external debt. This will ensure that the scenario with Greece is not repeated when adopted in the Eurozone. The PM also rejected the thesis that the investments in Bulgaria have dropped. On the contrary, in his words, they are increasing. Borissov said that even the World Bank is expected to open an outsourcing centre in Bulgaria, which will create 400 new jobs.

Boyko Borissov, Prime Minister: I am sure that Europeans, no matter how critical of our EU, know there is no better place to live, no place that is more stable, no higher...