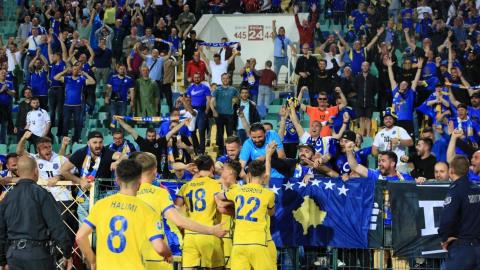 Major successes in only a few years

Along with tiny Gibraltar, the Kosovo team is the youngest in Europe, having been admitted to the world football federation, FIFA, and to Europe's UEFA, only three years ago.

Until then, Kosovo teams were unable to compete internationally. Then, two years before admitting it, FIFA agreed to allow the team to play so-called "friendlies" with other countries under special conditions.

In their first qualifications for the World Cup in Russia this year, Kosovo ended up poorly placed at the bottom of its group, with only one draw in 10 matches played.

Over nearly three decades, the Kosovo team has taken a long and difficult road to international acceptance until the country obtained full membership of FIFA and UEFA in 2016.

In 2012, the veteran sports journalist Xhavit Kajtazi published a book, Kosovo Football, from Slavery to Freedom (1991-1999), which supplied facts and images about football in Kosovo since the break-up of Yugoslavia in early 1990s.

Among the more striking images in the book are pictures of footballers using rivers for their after-game "showers".

Cold memories: Deprived to use their stadiums, Kosovo football players take shower in the river in 1997. Screenshot: Xhavit Kajtazi "Kosovo Football, From Slavery to Freedom 1991-1999

Fast forward to 2019, and Kajtazi says the Kosovo team is notching up results in football that have caught many experts by surprise.

"The latest win against Bulgaria and its flamboyant rise in FIFA's ranking have clearly defined that Kosovo has the potential, knowledge, quality and the...