Ramstein's Guitarists Kissed at a Concert in Russia 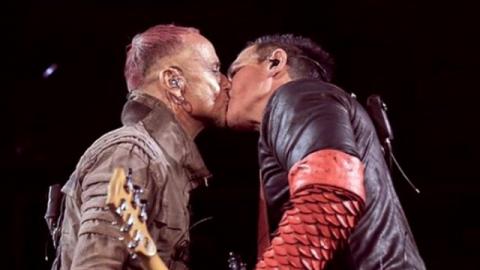 Paul Landers and Richard Cruse of Ramstein kissed on stage in Moscow to protest Russia's attitude toward the LGBT community, Contact Music reports.

The two guitarists from a German metal band exchanged a quick kiss while performing their song "Ausländer" in the Russian capital in 2019 as a political move designed to violate the country's anti-LGBT laws.

Adopted in 2013, Russia's gay propaganda law bans material that "distorts the idea of ​​the equal social value of traditional and unconventional sexual relationships." The law was condemned by Amnesty International and Human Rights Watch.

The law essentially makes it illegal in Russia to publicly express any type of homosexuality.

Following their concert at Luzhniki Stadium, Ramstein uploaded several professional photos of the show to Instagram, including one of the kisses between Paul and Richard.