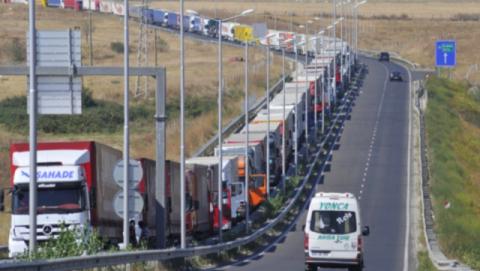 Traffic congestion is formed at Bulgaria's main border checkpoint with Turkey - Kapitan Andreevo. The queue of heavy trucks entering Bulgaria's southern neighbour is over 20 km long. Currently, the last tracks are shortly after the Shell gas station, located between Lyubimets and Svilengrad.

"In the last two weeks the queue has not been less than 17-20 km. We wait between 42 and 70 hours," a truck driver who regularly travels through the border checkpoint complains. According to him, the conditions in which he and his colleagues are forced to wait are extremely miserable. "There are not even bins where we can throw away our trash, toilets or water. Bulgarian authorities say that the problem lies in the Turkish country, but in reality the plug is at our border. It takes 10-15 minutes to cross the border from Turkey, Bulgaria," our reader explained.

According to Border Police data, traffic for trucks is extremely intensive not only at the exit of Kapitan Andreevo border checkpoint, but also at Lesovo border checkpoint. The reason for the kilometers long queues is the repair activities of the border checkpoint which are carried out by the Turkish border authorities. The Directorate stated that everything what the Bulgarian side could do is already done.

It is recalled that there were also problems at other border points. On Saturday evening and Sunday morning, for more than 12 hours, it was not possible to cross the border checkpoints Malko Tarnovo and Lesovo towards Bulgaria due to a breakdown in the document processing system at the Turkish border checkpoints.

The Ministry of Foreign Affairs announced that the General Consulate of Bulgaria in Edirne is in constant contact with the Turkish border and customs authorities and is ready to...