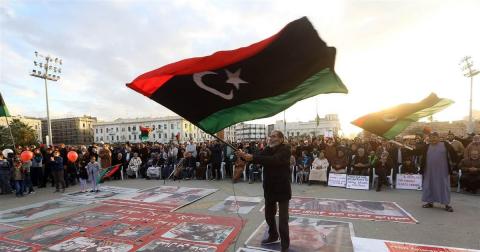 World powers and regional actors have launched on Feb. 16 an international committee to oversee pledges made for an arms embargo and cease-fire in Libya.

Speaking to reporters after a meeting of more than a dozen foreign ministers and top diplomats in Munich, German Foreign Minister Heiko Maas said participants reaffirmed their commitment to the conclusions of the Berlin Conference last month.

"Today we launched the International Follow-up Committee on Libya [IFCL], and thereby we put into practice one of the most important conclusions of the Berlin Conference," he said.

"This committee would now work to ensure that all the conclusions of the Berlin Conference would really be implemented. At the same time, it would accompany the UN-led, intra-Libyan dialogue process, and support it in the best possible way," he added.

Maas said that the recently formed IFCL will be co-chaired by the UN and one of the participant states or organizations of the Berlin process.

As the next rotating co-chair, Italy will host a meeting of IFCL next month in Rome, he added.

In a joint statement after the meeting, the current co-chairs -- the UN and Germany -- underlined that all the participant states declared willingness to implement the Berlin Conference conclusions fully.

"They had a discussion on the deplorable recent violations of the arms embargo, renewed their determination to contribute to its thorough implementation and welcomed progress regarding more efficient monitoring of the embargo under way," the statement said.

The participating states also urged Libya's conflict parties "to maintain the current truce and accelerate negotiations regarding a permanent ceasefire" in the country.