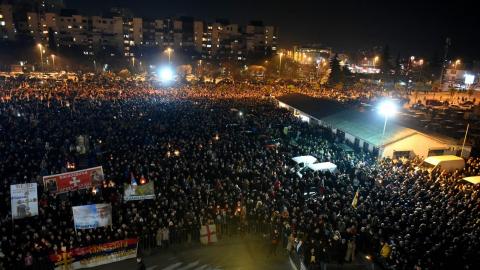 Given its rhetoric, symbols, flags and public discourse, it is not difficult to draw parallels between the protest movement and the "happenings of the people" and "meetings of truth" and "Serbian awakening" of 30 years ago - which changed the history of Yugoslavia for the worse, ending in wars.

This time, however, there are no politicians like Serbia's former strongman Slobodan Milosevic to play the role of redeemer. It's the Church that has taken up the task of "awakening" the people.

Its special status among the various religious communities in Montenegro has allowed the Serbian Orthodox Church to be an independent, almost untouchable, exponent of policies associated with Serbian nationalism, the wars in Yugoslavia and Russian interests in the Balkans.

While arguments over the potential transfer of church ownership under the new law should not be ignored, the struggle for political dominance in Montenegro is more important. The goal of the protests is not only the abolition of, in Church eyes, "the infamous religious law", but also regime change and - as the government itself presents - a change to Montenegro's whole political trajectory.

It should not be forgotten that the Serbian Orthodox Church was a strong opponent of Montenegro's independence. [Formerly, the republic was part of a loose "state union" with Serbia]. Serbian nationalists, including the Church, have never fully accepted the existence of a Montenegrin state with an independent foreign and domestic policy. For them, Montenegro is an...