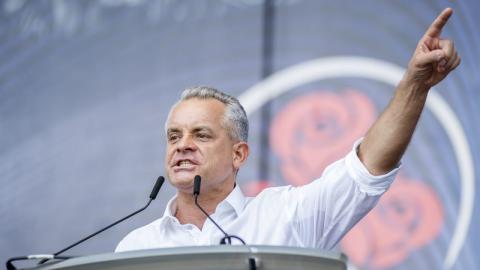 The US embassy in Chisinau announced on Thursday evening that procedures to send Vlad Plahotniuc back to Moldova have already been launched but that he cannot be deported quickly.

"We understand that Vladimir Plahotniuc is present in the United States, but is currently subject to administrative deportation procedures. Such procedures, including permissible judicial review procedures, may take significant periods of time," the embassy said in a statement.

On February 14, before it was confirmed that Plahotniuc was actually in the US, the State Department barred him from entering the country due to his involvement in "corrupt acts that undermined the rule of law and severely compromised the independence of democratic institutions in Moldova".

Plahotniuc is wanted in Moldova for money-laundering and for using a false identity.

But as investigative media in Moldova have reported, he also has citizenship of Romania and Russia.

A close friend of Plahotniuc, the MP Vladimir Cebotari, told N4 TV on Thursday night that the oligarch can choose the country to which he will be deported as he holds these other citizenships.

Plahotniuc is the former leader of the Democratic Party. He fled Moldova in June last year after the party was ousted from power, ending a tenure that critics said was characterised by rampant corruption and state capture.

Cebotari said he met Plahotniuc last summer after the oligarch left Moldova and that he believes that he does not have "any further intentions regarding Moldovan politics".

However, six MPs, including Cebotari, recently left the Democratic Party and formed a political group called Pro Moldova which is run by the godson of Plahotniuc, the ex-speaker of parliament, Andrian Candu.