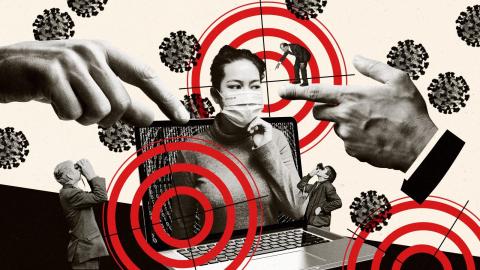 In the semi-democracies of the region, as lives moved from the public to the digital sphere, many freedoms were likewise suspended, while the burden of responsibility for violations fell on citizens as government imposed restrictions that in many cases flouted normal standards of human rights.

Just in the last two weeks, 80 people have been arrested, some of them jailed, for spreading fake news and disinformation, with the most draconic examples in Turkey, Serbia, Hungary and Montenegro.

Governments in Montenegro and Moldova made public the personal health data of people infected with COVID-19, while official websites and hospital computer systems suffered cyberattacks in Croatia and Romania. Some countries like Slovakia are considering lifting rights enshrined under the EU General Data Protection Regulation, while Serbia imposed surveillance and phone tracking to limit freedom of movement.

In responding to the COVID-19 pandemic, some governments are enhancing surveillance, increasing censorship, and restricting the free flow of information, warned Allie Funk, Research Analyst for Freedom on the Net, a Freedom House team monitoring internet freedom.

"Alarmingly, some authorities are exploiting the crisis for their own political gain," Funk told BIRN.

"China has deployed its sophisticated censorship apparatus to muzzle independent information coming from activists, journalists, and ordinary netizens. Authorities in places like Thailand, China, and Turkey have resorted to detaining or arresting internet users for posts on their social media accounts."

Despite a population of just 640,000, Montenegro's government took the drastic step of publishing a list of...