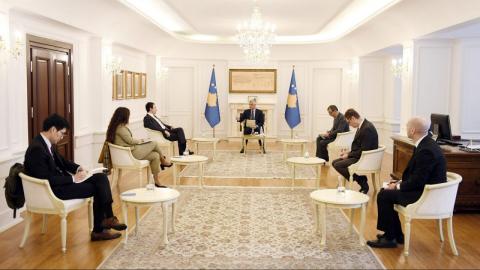 Kosovo President Hashim Thaci held consultative meetings with political leaders on Wednesday as he pushes for the formation of a unity government following the March 25 no-confidence vote in the government of Prime Minister Albin Kurti.

At his meeting with Kurti, Thaci did not offer a mandate to his Vetevendosje movement, LVV, to nominate the next head of government, as the constitution stipulates, although the LVV remains the biggest party in the Kosovo Assembly. He later claimed that the meetings with leaders, which should resume on Thursday, were only of a consultative nature, to see what to do next.

"Meetings are being held to form a basis for opinions, or shape further actions to be taken… after the dismissal of the government," Thaci said following separate meetings with Kurti, Isa Mustafa, chair of the Democratic League of Kosovo, LDK, and with Kadri Veseli, leader of the Democratic Party of Kosovo, PDK.

After the no-confidence motion, "what remains is to go for new elections" Kurti claimed, citing Article 82, point 2, of the Constitution, and reminding that "the President pledged to implement the constitution, the law and previous practice".

Kurti made the same point to Thaci in an official letter prior to the meeting, as well as via a Facebook post on Sunday, when he accused the President of failing to follow the constitution and called for elections after the COVID-19 pandemic is resolved.

While the clash between the President and...