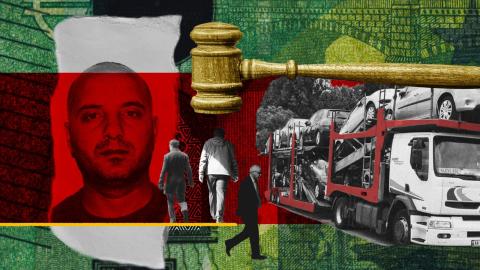 Within the year, money-laundering charges against Vladi and four others had been dropped, as one of Albania's most sensational criminal cases of recent years unraveled.

Court documents reviewed by BIRN, however, show prosecutors never corroborated Rizzatto's story, but that did not stop the judge in the case from dismissing the charges.

The defendants now face the minor charge of failing to declare cash at the border; even if found guilty, they stand to get the money back.

The dramatic turn of events raises fresh questions about the state of Albania's justice system even after years of reform efforts nudged along by the European Union and the United States.

"Prosecutors had no proof except for the 3.4 million euros," Radovan Cela, a lawyer for three of the defendants, including Vladi, told BIRN. "Judge Fran Prendi's decision was one of the best I ever read."

He said of Rizzatto: "I see Carlo as a credible man."

The itinerary of the trailer Bizark from Albania to Belgium.

Intriguingly, four days before the seizure, the leader of Albania's opposition Democratic Party, Lulzim Basha, told parliament that a "Toyota Yaris" full of "drug money" had been found and accused a senior MP of the ruling Socialist Party, Taulant Balla, of involvement. Balla sued Basha for defamation and, in the first instance verdict, won.