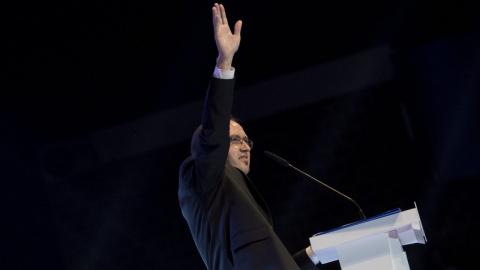 Kosovo's parliament on Wednesday confirmed in office a new government led by Avdullah Hoti, the deputy leader of the Democratic League of Kosovo, LDK, the junior party in the last government that initiated the no-confidence motion in March that toppled it.

With only 86 MPs present in the 120-seat chamber, 61 MPs voted for the new cabinet, 1 abstained and 24 voted against.

The new government is a coalition between the LDK, which has 28 seats, the Social Democratic Initiative, NISMA, with four seats, the Alliance for the Future of Kosovo, AAK, with 13 seats, and the Belgrade-backed ethnic Serbian party, Srpska Lista, with 10 seats.

Nine representatives of other minority communities also voted for the new government.

Only 86 MPs were present in the chamber because MPs from Vetevendosje, the largest party in parliament, did not attend.

The leader of the party's parliamentary group, Rexhep Selimi, who has demanded new elections, dismissed the new government as an "illegal enterprise".

A small group citizens took to the streets of the capital, Pristina, to protest against the holding of a parliamentary session to vote in a new government. Police intervened when some protesters tried to enter the government building.

"Thieves in prison!", "We want elections", and "Albin [Kurti], wherever you are, all of Kosovo is there with you", were some of the calls protesters made. A sign read: "I won't allow my vote to be manipulated...