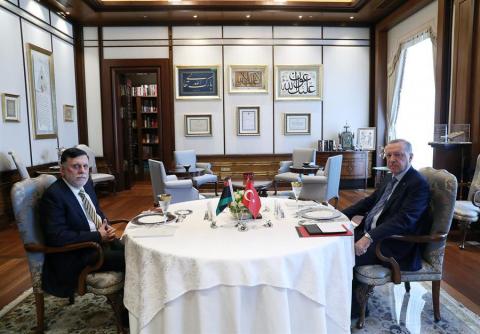 Forces fighting for Libya's internationally recognized government said on June 4 they had regained control over Tripoli and a military source with the eastern forces that have been attacking the capital said they were withdrawing.
Amid the Government of National Accord's (GNA) military achievement, its prime minister, Fayyez al-Sarraj, paid a visit to Ankara on June 4 for talks with President Recep Tayyip Erdoğan.
Turkey has been politically and militarily backing the GNA in line with an agreement Ankara and Tripoli signed in late 2019 that paved the way for the deployment of the Turkish Armed Forces (TSK) into Libyan territories to train and advise the Sarraj forces.
The Turkish intervention has prevented Haftar forces from capturing Tripoli and other GNA-controlled areas in western Libya despite the support the latter receives from France, the United Arab Emirates, Egypt and Russia.
The GNA military operations room said in a statement it had control over all borders of the Tripoli city administrative area.
Separately, a military source in the eastern-based Libyan National Army (LNA) said it would complete its withdrawal on Thursday from the Tripoli districts of Ain Zara, Abu Salim and Qasr Ben Gashir towards a town near its stronghold of Tarhouna.
Pro-GNA forces said on June 3 that they had re-seized the capital's Tripoli International Airport, held since 2019 by rival forces backing Khalifa Haftar, in the latest in a string of defeats for the eastern-based military commander.
"Our forces have fully liberated Tripoli international airport," said Mohamad Gnounou, spokesman for forces backing the GNA.
Libya's main civilian airport, lying on the southern edge of the capital on a key highway leading into its center, had been...

Egypt bets on ancient finds to pull tourism out of pandemic
Al-Monitor: Egypt sets conditions for full normalization with Turkey