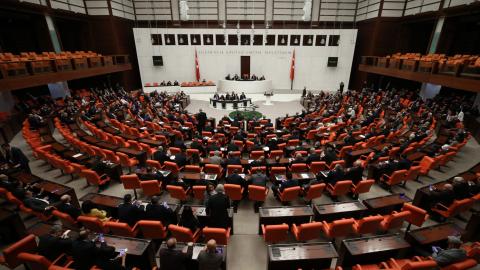 Opposition and rights groups criticized the bill, saying it will legalise the blacklisting of public officials and will effectively allow the government to only hire its own supporters.

"The new bill means blacklisting and … prevents people who do not think like the government from working in the public space," Sinan Muslu, General Secretary at the Education and Science Workers' Union, told Deutsche Welle Turkish on April 7.

The bill allows public institutions to collect data from police, courts, the intelligence agency and other related state institutions on whether there have been any investigations, files or court decisions on job applicants.

The ruling parties say the bill was needed to stop so-called Gulenists, accused of fomenting a failed coup in 2016, from working in public institutions.

More than 125,000 people were already dismissed from public offices following the failed coup attempt in 2016. The exiled cleric Fethullah Gulen, now based in the US, denies any connection with the event.

But the government insists Gulen and his supporters masterminded the coup attempt, calling the Gulen network the "Fethullahist Terrorist Organisation" or "FETO" for short.

"The AKP is making a coup to continue its rule. We are facing a bill which aims to maintain a one-party ideology in public institutions," Yildirim Kaya, a lawmaker from the main...