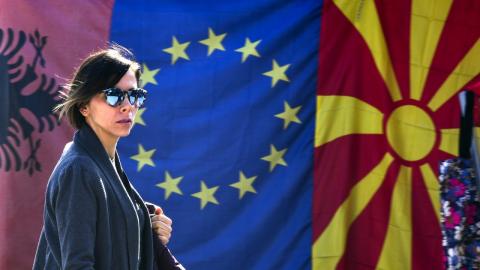 Germany and Slovakia have called for the EU to stick to the original plan of Albania and North Macedonia progressing towards eventual mem bership as part of one package.

It came after Enlargement Commissioner Olivér Várhelyi's suggested that the EU consider starting talks only with Albania in June if North Macedonia's path is still blocked by neighbouring Bulgaria over their dispute about history and identity.

Slovak Foreign Minister Ivan Korcok tweeted along the same lines: "Credible EU enlargement policy is now about abandoning the [Bulgarian] veto in the Council, which has to recognize progress made by North Macedonia and Albania."

During his visit to the region this week, where he visited both Skopje and Tirana Varhelyi suggested separating the two aspirant countries.

In a statement for Euro News on Thursday, he said: "If we run into difficulties again with North Macedonia, which means that we are unsuccessful [in] convincing Bulgarian and North-Macedonia [of] a mutually agreeable solution, then the question [is] whether we can move forward with Albania only. And we will have to consider that question," he said.

Asked if formally "disjointing" the two countries was an option, he replied: "It might be an option, yes."