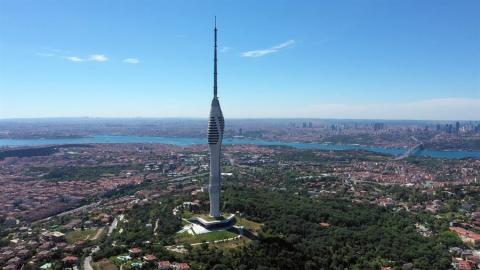 Turkey's president inaugurated the state-of-the-art Çamlıca TV-Radio Tower in Istanbul on May 29.

Situated on a hill overlooking Turkey's largest city, the hi-tech communications tower will fulfill all broadcasting and transmission requirements in Istanbul.

It has the capacity to air 100 FM radio broadcasts at the same time- a first in the world.

President Recep Tayyip Erdoğan said the tower is one of Turkey's most significant investments and a project symbolizing the country's vision in the modern era.

It will allow authorities to do away with the multiple communications towers that marred the city's skyline and posed health risks for the population.

The tower is proof of the AKP's environment-friendly policies, the president said.

With its highest point standing at more than 580 meters (over 1,900 feet) above sea level, the Çamlıca Tower is now the tallest structure in Istanbul.

It is expected to be a major attraction for visitors to the city and will provide a major boost to Turkey's tourism sector, Erdoğan added.

"We have completed a project that will set an example, not just in our country, but for the whole world," he said.

He said the tower will serve television, radio, and media institutions, as well as communications operators, adding that the government plans to replicate this model throughout Turkey.

The president also announced that the foundation of the Istanbul Canal project will be laid by the end of June.

The Çamlıca Tower is the largest tower in Europe and, with its technical features and architecture, will become a new symbol of Istanbul, Adil Karaismailoğlu, Turkey's transport and infrastructure minister, said at the...