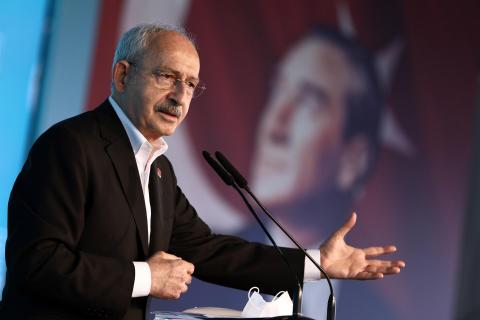 It's impossible to write a new constitution as suggested by President Recep Tayyip Erdoğan under current political and economic conditions, the head of the main opposition Republican People's Party (CHP) has said, blaming the government for the mismanagement of the country.

"Erdoğan should deal with this first: There is a fire in the kitchen; people are in miserable condition. You first have to solve these problems. But he has already entirely lost his capacity to run the country," Kemal Kılıçdaroğlu told the reporters over the weekend.

President Erdoğan and his closest ally, the Nationalist Movement Party (MHP), have jointly called for a new civilian constitution and invited other political parties to contribute it, too. They propose a referendum for a new constitution on the centennial of the Turkish Republic in 1923.

Kılıçdaroğlu cited Erdoğan as the source of the ongoing problems in Turkey as he can no longer manage the country, saying, "We have to immediately go to early polls. If you want a referendum, let's do it and ask people whether they want early elections or not. If they want, we hold the polls; if they don't, we won't."

No charter can be amended in a country where the politicians are being threatened and the parliament is under tutelage, Kılıçdaroğlu stressed, while also criticizing the government for not holding a sound probe over the claims of a mafia leader against Interior Minister Süleyman Soylu.