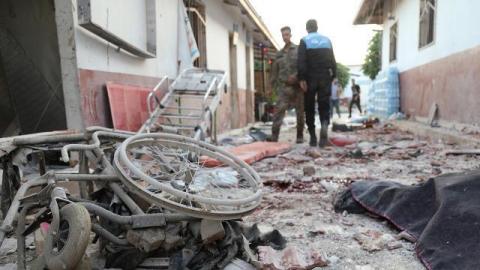 Turkey on June 12 condemned an attack by the terror group YPG/PKK on a hospital in Afrin, northern Syria which killed at least 13 civilian patients and injured dozens.

In a statement, the Turkish Foreign Ministry "strongly" condemned the attack and its perpetrators, including one of the YPG/PKK's other aliases, the so-called SDF.

"The PKK/YPG/SDF, which does not hesitate to target innocent civilians and healthcare workers who work tirelessly to serve the Syrian people under all conditions, with artillery and missiles, has once again demonstrated its terrorist organization identity and bloody face," the statement said.

"In this respect, we invite the international community to see the truth and to end their support for this terrorist organization operating under different names," it said.

Turkey has often accused Western countries of turning a blind eye to the vicious attacks of the YPG/PKK, and blasted some countries such as the U.S. for supporting the terror group.

"We reiterate that we will resolutely continue our fight against all terrorist organizations that pose a threat to our national security and Syrian civilians, always and everywhere," it added.

Communications Director Fahrettin Altun condemned the attack on innocent civilians as well as the supporters of the YPG/PKK terror group.

On Twitter, Altun wished God's mercy on those who lost their lives in the "malicious attack" and a speedy recovery to the wounded.