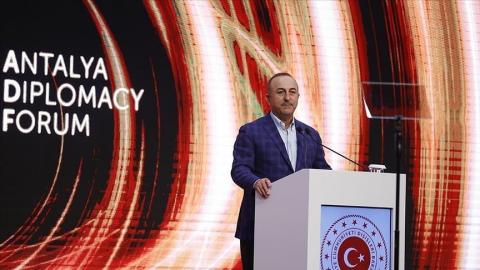 While calling on the leaders of the European Union (EU) to make the upcoming summit a turning point for ties between Ankara and Brussels, Foreign Minister Mevlüt Çavuşoğlu on June 20 urged the Union to take decisions for concrete steps for this bid, including a mandate that will authorize the EU Commission to negotiate Customs Union with Turkey.

The EU should no longer stall Turkey, the minister said, speaking at the press conference held on the occasion of the end of the Antalya Diplomacy Forum.

"The EU must now return to the table. We expect concrete steps from the EU," Çavuşoğlu said while urging EU leaders to launch talks to upgrade the Customs Union agreement and renew the migrant deal in a way to meet the necessities of the current problems.

The modernization of the Customs Union agreement is not a political issue, and it is for the benefit of both parties, he stated.

On the other hand, there are a few steps to be taken regarding other elements of the migration deal signed in 2016, including visa liberalization for free travel of Turks in Europe, Çavuşoğlu noted.

"It should not be stuck on a few words and waste time on fulfilling the remaining criteria," he stated.

The minister recalled statements by EU officials and politicians in which they said, "Even though we have disagreements with Turkey, Turkey is an indispensable and important ally for us."

The problem of irregular migration will continue after COVID-19, and even many people tend to leave Afghanistan after the withdrawal of NATO forces, he added.