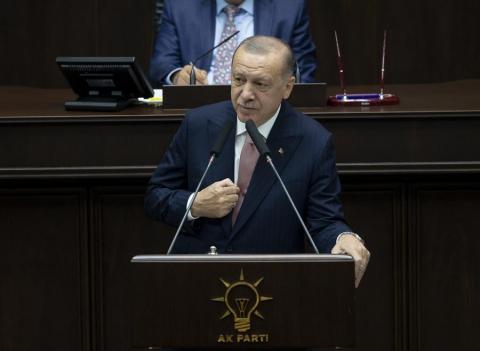 President Recep Tayyip Erdoğan has vowed to complete the multibillion-dollar Kanal Istanbul project in six years, which he said will create two new earthquake-proof residential areas on the two banks of the canal, denouncing the opposition's campaign against the project.

"We will speedily begin the excavation of the canal. Our objective is to complete it in six years," Erdoğan told his lawmakers at a weekly parliamentary group meeting on June 30.

Erdoğan, who laid the foundation of the first bridge of the project in a ceremony in Istanbul over the weekend, responded to the criticisms of the opposition over it. The leaders of the Republican People's Party (CHP) and the İYİ (Good) Party, Kemal Kılıçdaroğlu and Meral Akşener respectively, vowed the creditors and businessmen who want to take part in the project that they won't make the payments if they come to power.

"They are so unbalanced that they are now threatening the countries from where we want to lure investments as if threatening businessmen and bankers were not enough. 'We won't pay your money if you loan credit' they say. They have no idea what a state is and how to run it," Erdoğan stated. They even have no information about the international arbitration mechanism, he suggested.

Erdoğan reminded that Kanal Istanbul will increase the security of the Bosphorus as the naval traffic through the straits have increased over time. Two residential areas each for 500,000 people will be built on the two banks of the canal as part of the urban transformation efforts against a major earthquake, the president said.

"It's ironic that those who have not fulfilled their responsibility towards Istanbul are blabbing around the Kanal Istanbul. They argue the project has...