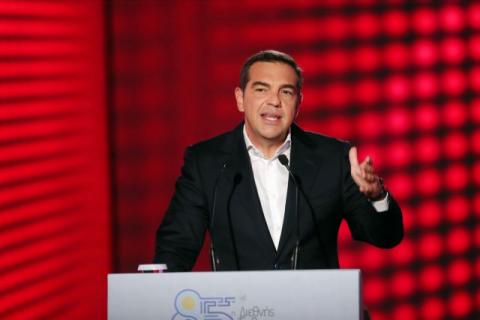 Amidst rampant talk of early elections, main opposition Syriza leader and former PM Alexis Tsipras in a major address at the Thessaloniki International Fair (TIF) this evening unveiled his party's programme and lambasted government policy in a variety of areas, from management of the COVID-19 epidemic to economic, heath, and education policies.

As he stepped up to the podium, mega screens in the background flashed with neon signs with the words Freedom, Equality, Democracy, and Solidarity, along with images of healthcare workers, who occupied the first rows in the audience.

He declared that SYRIZA can guarantee a "strong progressive government" that will heal the socio-economic wounds created by the Mitsotakis government, which he accused of making the rich richer and the poor poorer.

Notably, he suggested that if SYRIZA were to finish first in the next general election he would tap distinguished non-party members and exponents of key social groups to serve in the government.

Tsipras depicted his party as a defender of the middle class, while New Democracy has steadfastly maintained that SYRIZA's policies of over-taxation, when it was in power, literally destroyed the middle class.

He blasted Prime Minister Kyriakos Mitsotakis with charges that he has created an autarchic government of one-man rule, with the entire executive branch confined to the PMs office, Parliament completely side-lined, and with a harsh law-and-order agenda that has led to the excessive use of force by police.

Pledge to upgrade NHS with 3bn euros in new funding

Tsipras also blasted the government's management of the COVID-19 epidemic and of August's disastrous wildfires, in which 13,000 hectares of forestland...