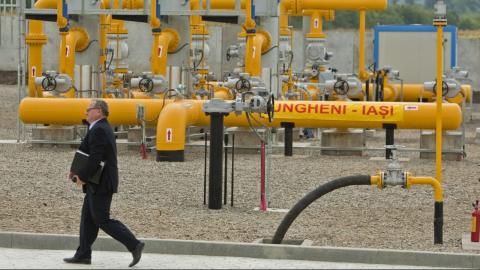 Prime Minister Natalia Gavrilita said on Tuesday that Moldova is currently engaged in intensive negotiations with Russian state company Gazprom on extending its gas supply contract, but is looking at several gas supply possibilities in other European countries as well.

"Gazprom is trying to negotiate a price increase. It is unlikely that we will obtain the previous prices," Gavrilita told a press briefing.

"When we have a negotiated price, then we will communicate it publicly," she added.

Gazprom has extended its current gas delivery contract with Moldova to the end of October, but has already raised the price to $790 per cubic metre. Until now, the average price paid by Moldova in 2021 for Russian gas was about $200 per cubic metre.

Spinu left for Poland on Monday for a two-day visit to discuss the supply of natural gas for Moldova.

Spinu announced last week that Moldova is entering "alarm mode". He said that the government has already ordered a switch to oil consumption for heating purposes, with the fuel to be taken from the state's reserves.

Moldova is also seeking help with gas supplies from neighbouring countries like Romania and Ukraine.

Romania's interim Foreign Minister Bogdan Aurescu announced on Monday that he will tell European foreign ministers who are meeting in Luxembourg about the gas supply crisis in Moldova and will ask him to help Chisinau...