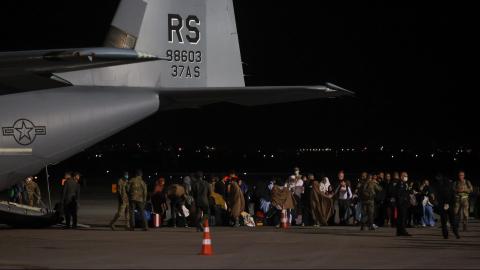 A total of 100,000 euros will be allocated after Montenegro pledged financial support during a UN meeting on September 13.

"The people of Afghanistan deserve to live in a safe and secure environment with guaranteed fundamental rights. The Afghan government must respect its obligations under international law, including human and humanitarian rights," the government said in a press release.

"Since 2010, Montenegro has been engaged in Afghanistan to support the long-term stability and security of the country," it added.

Montenegro participated in the NATO-led mission in Afghanistan from 2010 and deployed a total of 557 army personnel there.

According to the Defence Ministry, since 2010 almost every fifth member of the 2,000-strong Montenegrin army has participated in the NATO-led ISAF or Resolute Support missions.

The government also said on Thursday that a newly-established state body will discuss the possible hosting of Afghan refugees in Montenegro.

"It will consider options for responding to the humanitarian crisis and possible capacities for the reception of a limited number of refugees from Afghanistan, in accordance with the practice of other NATO members that were engaged in Afghanistan," it said.

In August, a group of Montenegrin NGO activists called on the government to offer to host Afghan refugees fleeing the country after the Taliban took control, warning that it anyone who is on Montenegrin territory should be able to apply for asylum in accordance with the Montenegrin Law on International and...