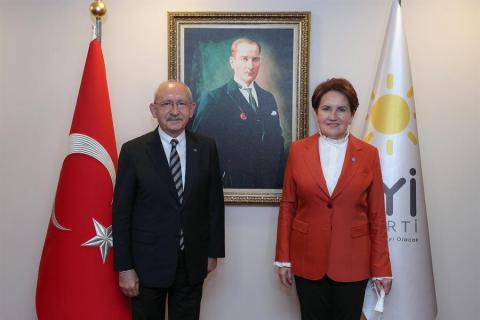 "We are making a clear call: You [government] cannot run the country. Go to elections as soon as possible," Kılıçdaroğlu said in a joint press conference with the İYİ Party leader.

"Normally, the Central Bank should deal with price stability. It left the function of a central bank. Now it is an institution that looks at the depreciation of the Turkish Lira and the increase in the foreign exchange as a spectator," the CHP leader said.

He accused the bank of failing to intervene in the depreciation of the Turkish Lira.

"We come across a country that has the appearance of a poor country, completely below the economic standards of Turkey," he said.

Akşener, for her part, said, "There is no other choice but elections."

"As of today, if our other political parties, as the two components of the Nation Alliance, participate, it is possible for us to grow and take the system away," Akşener said.

The economy staff of CHP and IYI Party would come together and work on the current state of Turkey's economy, she said.

Calling for an immediate election, Akşener said, "Now the end of the road is in sight, more destruction, more poverty, more deprivation. The way to eliminate all this is to hold elections, to make free and independent and impartial elections, and to open the way to respect whoever our nation prefers, and elections should be held."